I haven't been here in a while. Shame on me. I have fostered some kittens, and some puppies since my last post, and it's been hectic to say the least. And I love it. :) 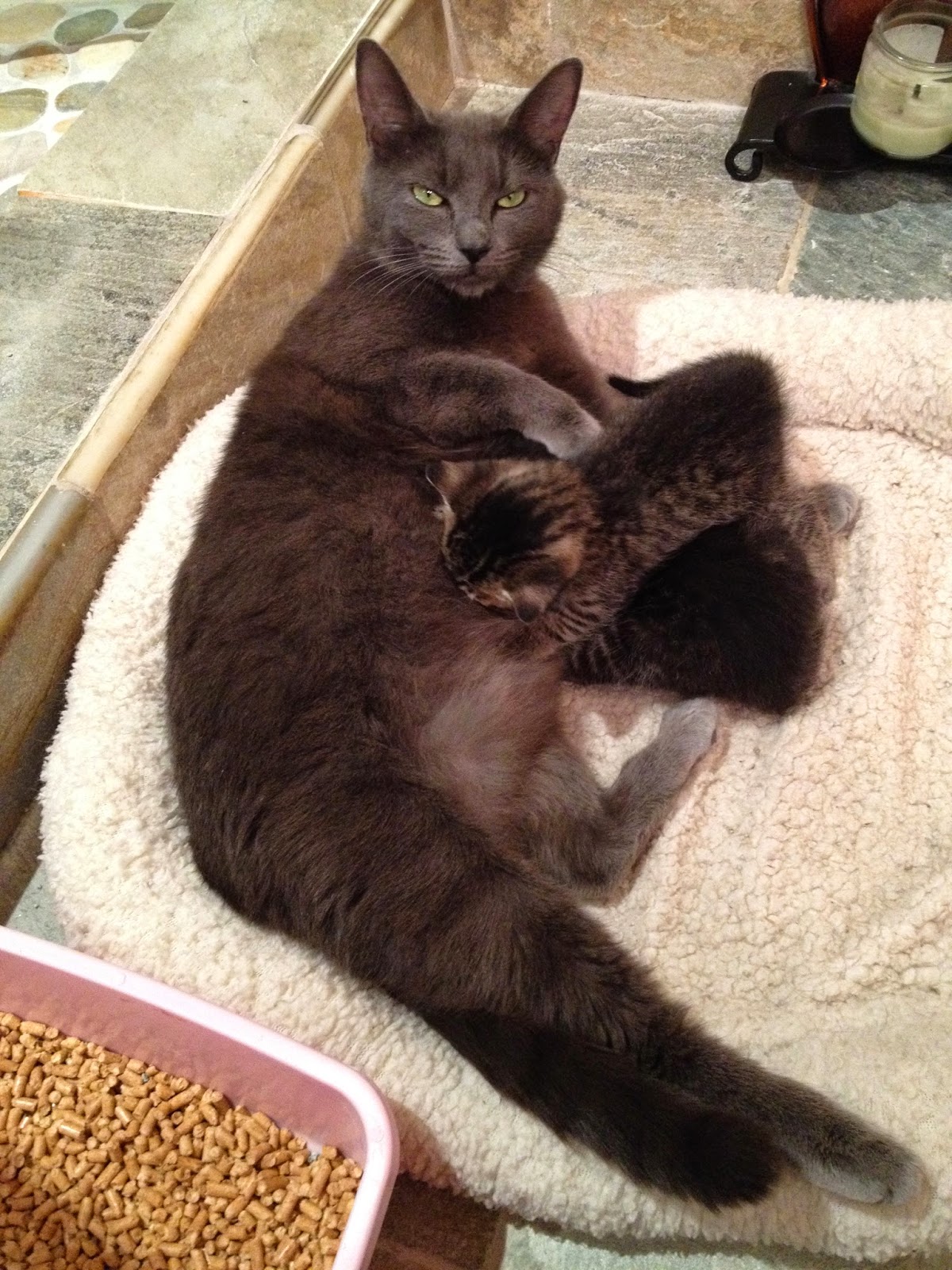 These guys stayed here for a couple of weeks. Mama Lola, and babies Fergus and Fern. They went to a couple in Gainsville that wanted to adopt the kittens, and so they fostered Lola too. Last I heard, the grandma wanted to adopt Lola! She was very sweet, and very young herself. Great news for all involved. 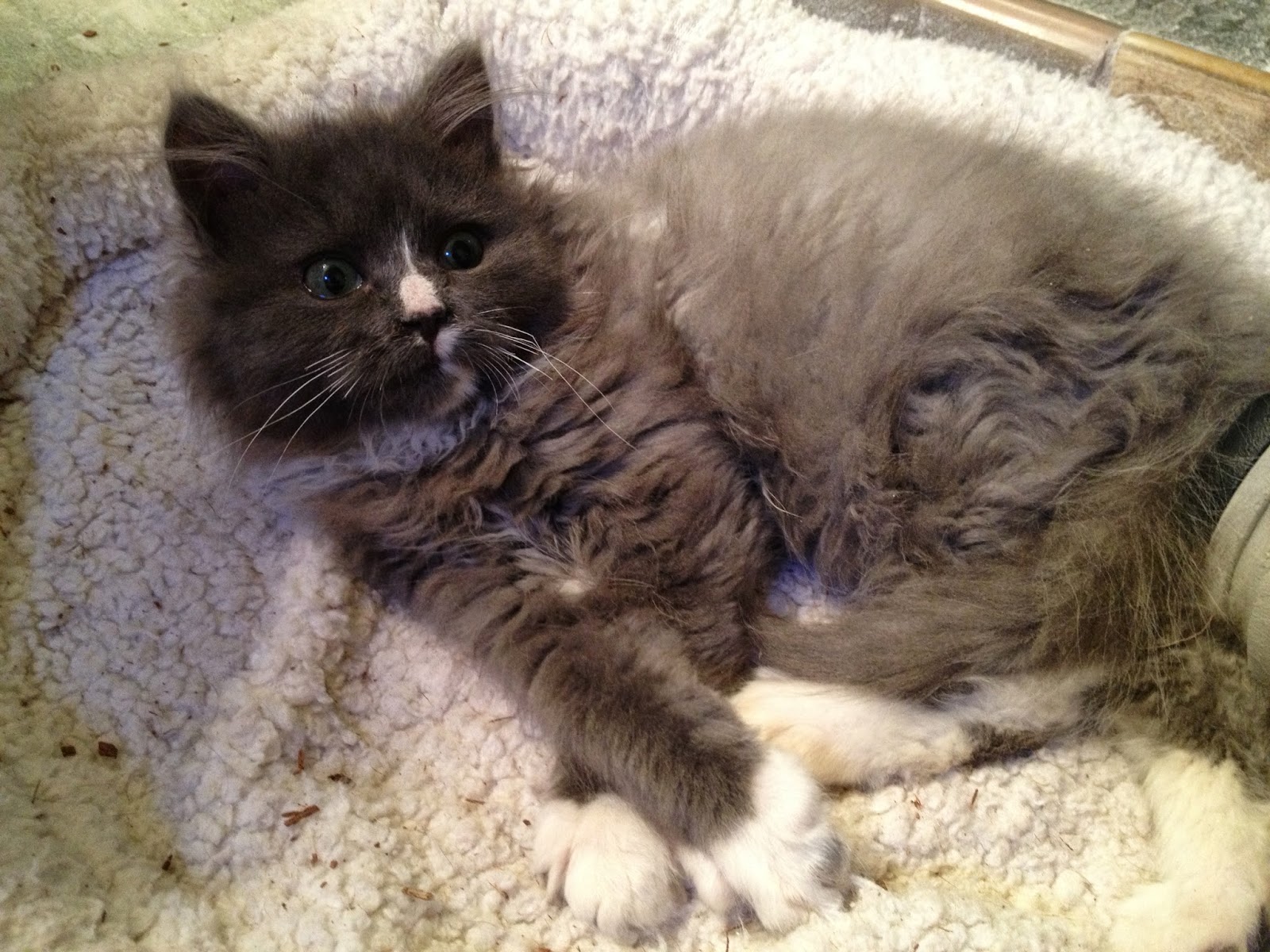 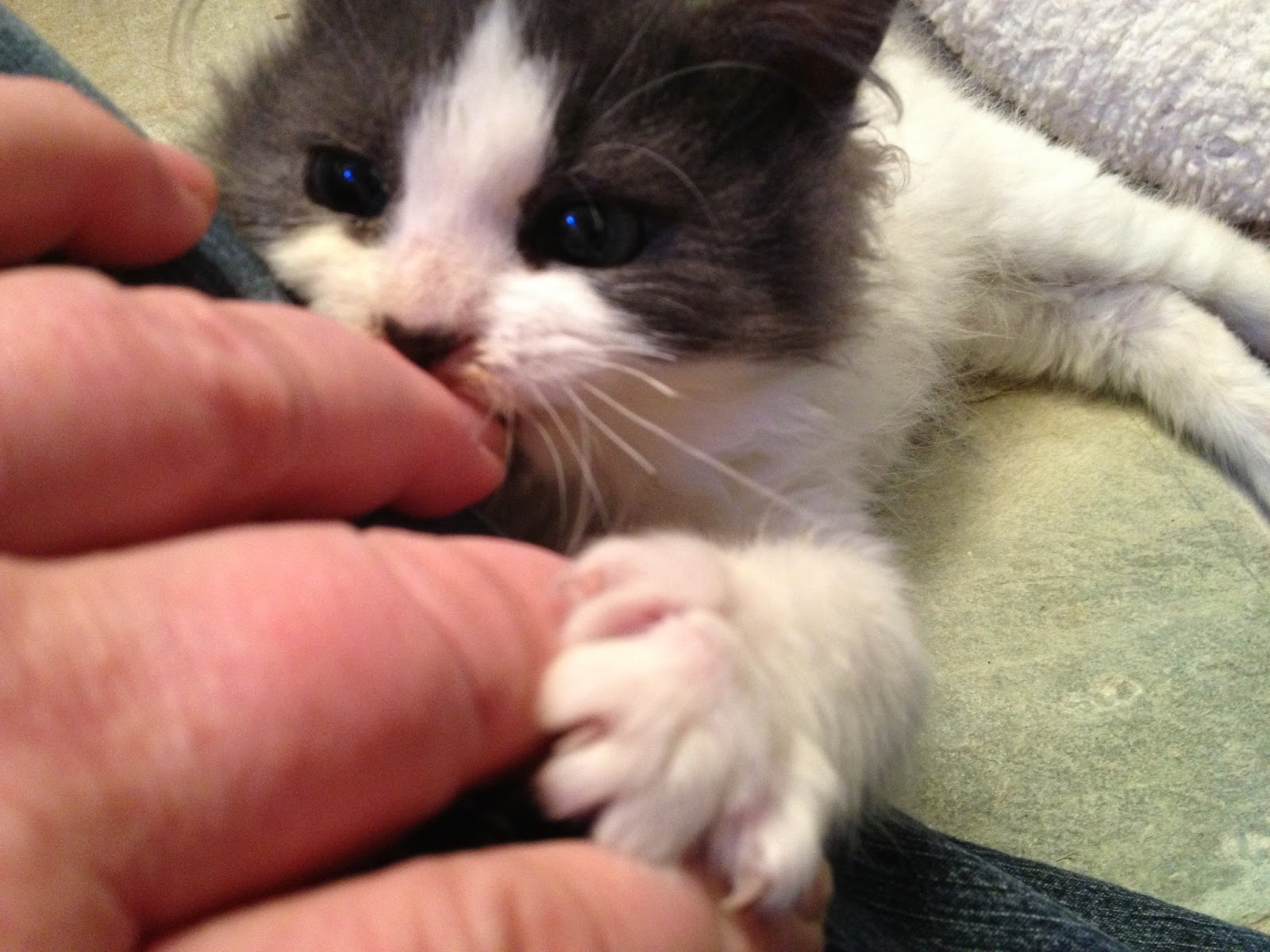 These two were only here for a few days, a layover if you will. :) I hate to admit it, but I can't even remember their names. They came in snotty, and a little afraid, and they left feeling pretty good I think, and loving attention! They were interesting with their markings, as the grey color on their heads faded the further back it went. It almost looked like someone spilled baby powder on their backs. 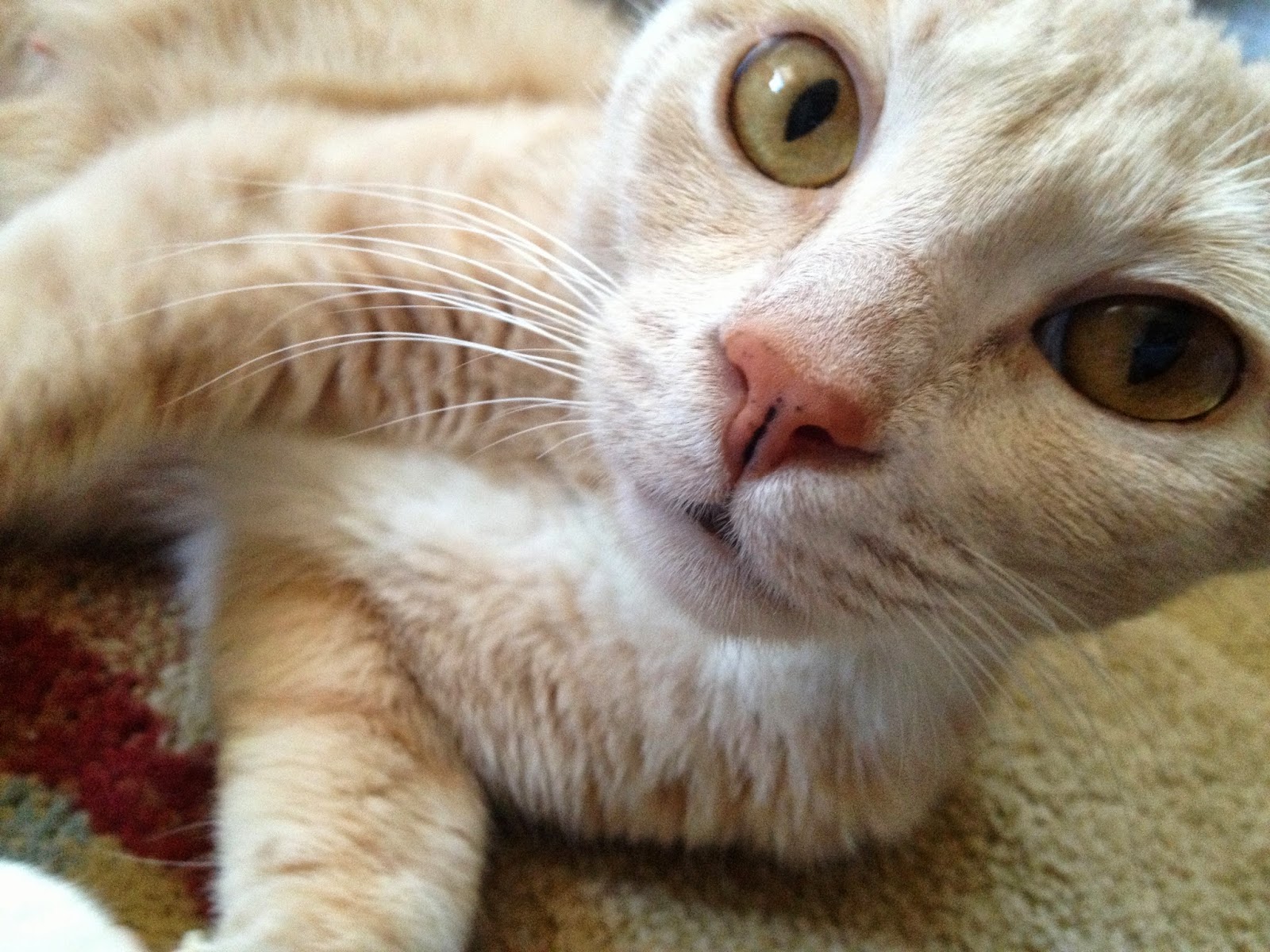 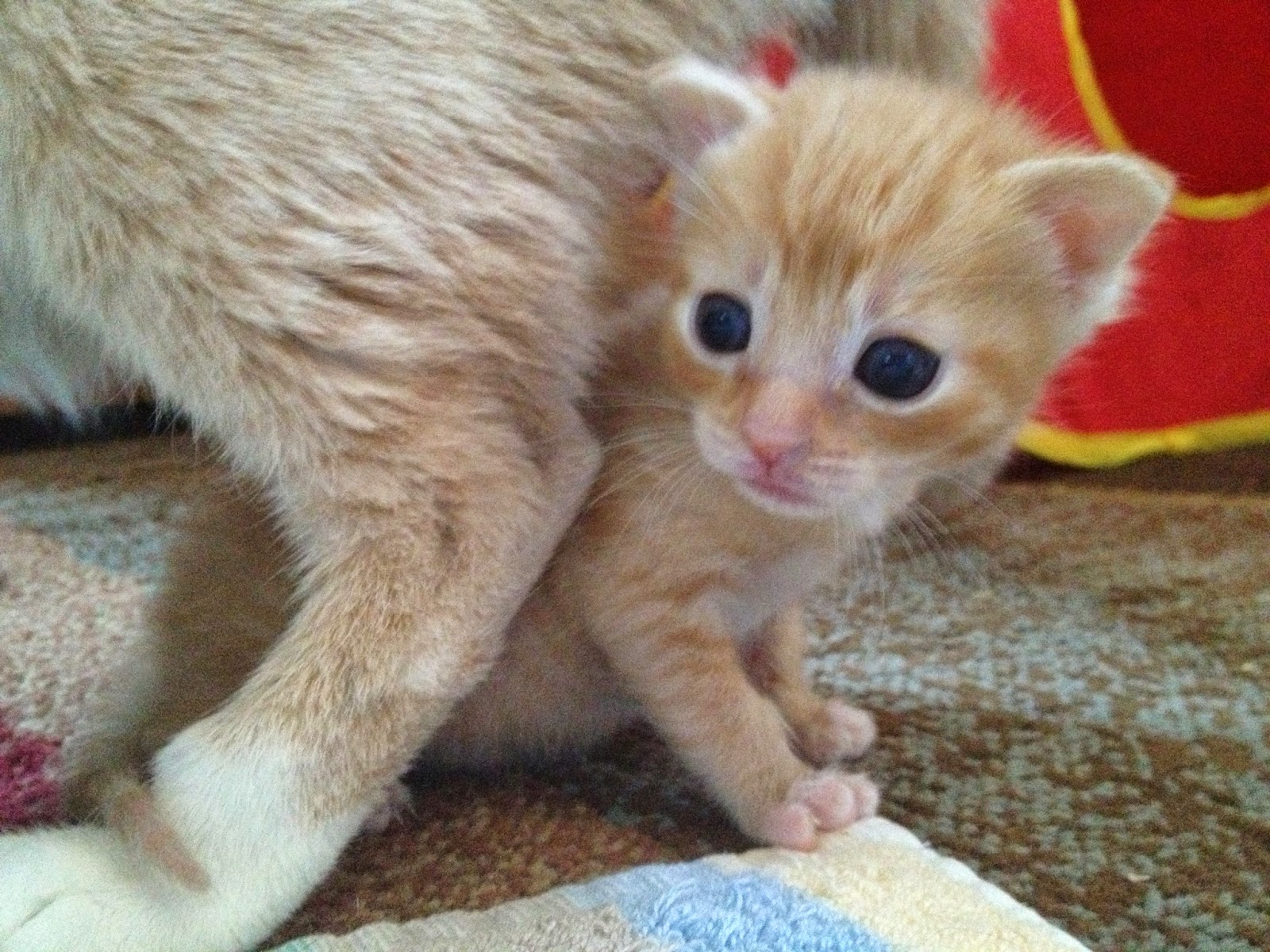 I had this pretty buff colored mama cat Sugar, and her single little orange baby born on Valentines Day, so we named her Lovie. She was the only kitten to survive, and they both came to me from another foster than had kittens with ringworm, so they needed another place to stay. These guys actually came before the grey and white kittens. They were both so cute.

I have been getting puppies more than kittens this past year, and here they are.

So, we spent most of the summer fostering 3 puppies. They were adorable, but I am here to tell you, they are harder than kittens! We took in 2 of the pups just before Memorial Day, and the third a couple of weeks later, and the last one went to her forever home just before Labor Day weekend. Greer (now Mae) left on Saturday around 10:30 AM. We were very excited to see them all go to wonderful homes, and happy to take a foster break.

Later that day we headed out to an event around 1:00, to Wags and Whiskers. If you don't know, Wags and Whiskers is a community-oriented event for animal loving shoppers of all ages to spend an afternoon at The Village at Shirlington with their pet. The event features 50+ onsite exhibitors ranging from pet services and accessories to onsite adoptions.

We walked around, had lunch and ran into another foster friend. She said she was going out of town, and asked if we could take her 4 kittens for her. approximately 5 hours.


Now we have these tiny little (less-than-a-pound-each) kittens. Pearl, Tabitha, Sullivan and Tallula. They are pretty cute. It seems like a LONG time since I have had kittens. Since the last batch, I stripped the hardwood floor in the spare room, and sanded and re-polyurthaned it. It's all put together, and I was having serious issues about putting kittens back in there. These guys were small enough to put in the pack and play...or so I thought.

The first night, I was laying in bed reading, when I heard what I thought was my cat Ripley playing in the catch tray of the large ficus tree I have in the bedroom. I looked, only to discover it was not Ripley at all, but Sullivan! Not only that, but I found Tabitha under the bed too! Not good.


I took them back and put them in the playpen, fed them all, and put a light fleece blanket over the top. That did the trick for the evening. I knew I needed to come up with a better solution. After searching for a plastic pool, but not having any luck, I decided to take a chance, and picked up about the last blow up pool I could find.


Wow! What a good idea! It pretty much fills the room, it keeps them contained, and it's easy to clean! They are happy, have a lot of room to play in, and haven't really tried to get out. Bonus, I can sit in there with them, unlike having to take them out of the pack and play to give them any attention.


We should have them for another week, until their original foster mom gets back in town. Then I AM going to take a break!
Posted by Jamie at 2:06 PM 3 comments:

It's not just about kittens anymore


Darby and Milo went to another foster that had a mama cat to see if she would take them, and she did. They were happy to have a mama and she was happy to have some relief. No rest for the weary, we took in a mama cat with 3 babies, and an additional singleton. Mama is as sweet as pie, and the babies are adorable. (Of course they are, they're kittens!)

Mama is Miss Jane Hathaway, and the kittens are Mr. Driesdale, Jethro, Ellie Mae, and Jed. The hillbillies.

Now they want to send these guys to another foster home. Why? To free me up for bottle babies or sick babies. Oh, and did I mention I have puppies?

Yeah, I got a call to see if I could take 6 pups for a day until another foster got back in town. I did. They were two days old, and a handful. I ended up keeping 2 and the other foster took the smallest 4. The mama dog was really sick with heart worms and pneumonia. I found out later that she actually had 11 pups and 5 died at birth. They didn't expect any of them to live.

Three of the smaller pups died, but the other 3 pups seem to be doing fine. I named my two Gilbert and Greer and the smaller pup is Chuleta, nick named Chewy. She is coming here today for a couple of days while her foster is out of town. The remainder of the family will be together again.

Bentley loves the puppies. Well, he loves to lick the formula off their faces. Pancito is less sure about them, but is gentle.

out with the old, in with the new

I found out that the only one of the fab 5 that has not been adopted is Mr. Bean. The folks that adopted Boom and Joey initially wanted Bean, but Joey changed their minds when he "chose" them.

He and Cia shown here are still available for adoption. They look pretty cute together. Cia and 2 other kittens came and stayed with the Fab 5 for a couple of days before they all went to an adoption event, so Cia and Bean were already acquainted. We would love it if they got adopted together.

In the mean time, we have a couple of newcomers to the kittah room. After a week off, we now have 2 bottle babies in house. Meet Milo and Darby.

They are about 2 weeks old, and are getting quite the welcome. They have met Bentley and Pancito and today they got to come to work with me, and have been getting a lot of attention.

Milo is a bit smaller than his sister, and is the most vocal so far. Darby likes to play a little after she eats, and rolls over on her back and bats her brother. It's funny when they are this small, they seem to play in slow motion.

They are both bottle babies so they will be coming with me to work for a week so they can be fed every 3-4 hours. Getting up at 2 AM to do the night feeding for now, but they will be starting on some slurry soon, and I can let them sleep through the night. They are so cute that it doesn't bother me to get up and feed them.

I love the video where Darby is eating. Those little ears are going 100 miles per hour!

So, the fab five left for a weekend event last weekend, and never looked back. I am not sure who was adopted from that event...I was out of town. I told the powers that be that I was available as of Sunday to take anyone back, but they said they wanted to keep me available for bottle babies, so right now, I am kittah free.

Before the adoption event, Joey and Boom were adopted by a very nice couple from Australia. They actually came for Boom and Bean, but as it happens with animals, they choose you, not the other way around.

Joey was always the shy one, and although beautiful, I was worried he would be shunned because he was not lovable enough. Boy was I wrong. Joey climbed in Jodie's lap, and promptly fell asleep. That was all she wrote.

I got an e-mail from them, and some pix. They are loving those boys, and seem to be fitting in just fine.

For now, we have an empty room...but I doubt that will last long.

The 5 little ones and mama are doing great. Had a little scare with a lethargic Twinks and some vomiting, but after their worm treatment, all is well.

It is hard to get the little ones time to meet the dogs because mama is very protective of them. Once they get their shots, we will probably take the itty bitties out a couple at a time to meet them. I feel like we haven't spent enough time with these guys. It's easy to just let mama do the heavy lifting, but they need socialization! This week, at least an hour a day, minimum.

Another set of kittens have arrived. Mamma and 5 babies, all very healthy. Carlotta the mamma, came with the name Fluffy. Then we have Donk and Twinks, and Bean, Joe and Boom.

Hopefully they will stay healthy. They were born march 9th. 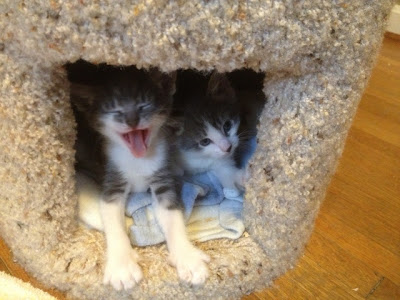 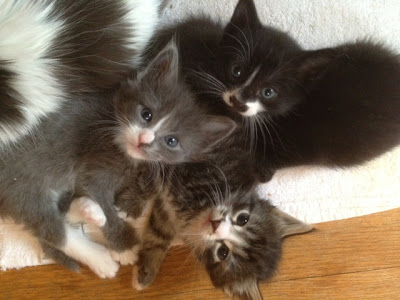 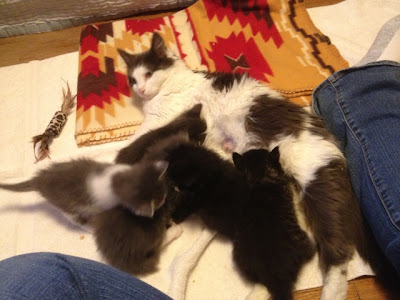